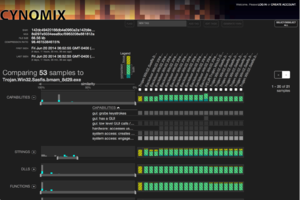 Similarity Evidence Explorer for Malware (SEEM) is a scalable visualization for comparing sets of attributes between malware samples. Malware analysts often need to understand if they are analyzing a novel malware sample or if it is a variant of an existing sample, and if it is a varient, in what ways is the sample different (e.g. did it add or remove functional components like a keylogger). This novel visual comparison tool allows malware analysts to do just that.